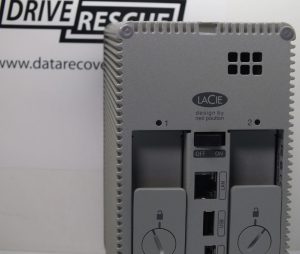 This RAID disk (pictured above) owned by a Dublin-based design and multimedia company was in our lab recently for some data recovery. During building renovations their business premises, experienced a sudden power cut. Such an incident is normally not good for disk health. But thankfully most disks can compensate for sudden power loss by using centrifugal force to move the head disk assembly back to the disk’s parking zone. However, in this particular instance the power cut off; then went back on again momentarily. Now with this type of scenario disks have a little more difficult time. Because when this happens, the head disk assembly, whilst moving back to the centre of the disk, risks getting “stuck” on the platters.

In this particular case, the first disk (disk 0) escaped any mal effects, but the second (disk 1) refused to spin up at all. Instead, the disk, a Seagate Constellation ES, made a humming noise. We brought it into our clean-room and confirming our expectations, we found the HDA stuck midway across the platters. Using customised tools for Seagate disks we gently unstuck the delicate HDA from the platters. The disk was reassembled and connected to our recovery system. It spun up with a reassuring healthy sounding spin. But, as any experienced data recovery technician knows, trusting a repaired disk (not matter how fastidiously repaired) is tempting fate! Thus, to err on the side of caution, we imaged the repaired disk onto a new 2TB NAS-compatible disk – a process which took around 4.5 hours.

Now came the moment of reckoning. Disk 0 and the image of disk 1 were put back into the disk bays of the LaCie NAS and the device was powered up. After a 90 second wait. The volume mounted on the host (running OS Sierra) and appeared to be complete. To verify, we invited a representative from the client company to remotely login to your systems (via an encrypted connection) to view the recovered files. Much to his satisfaction, all Illustrator and Photoshop files appeared to be present.

It is for scenarios like this that the Uninterruptible Power Supply was invented. Whilst Ireland enjoys a very stable and reliable power network and we experience few electrical storms, there are always bolt-out-of-the-blue scenarios which merit a UPS (power-cuts during maintenance work, accidental power switch-offs etc,.) Such a device contains batteries which delivers power to your systems even when the mains power has been interrupted. It means that your systems and in particular your hard disks are not subject to sudden shutdowns. A UPS also offers users the opportunity to gracefully save any work still residing in the RAM. Manufacturers such as PowerWalker, APC and Eaton offer an extensive range of UPS devices catering for SoHo environments right up to data centre level.

But, perhaps the greatest lesson from this case is not to have your RAID devices configured in RAID 0 in the first place. It offers no protection should one disk fail. (In fact, NAS manufacturers should really put a sticker on their devices to warn users of this risk). For a two-disk configuration, RAID 1 is much safer. And finally, a NAS device should not be considered a backup. This continues to be a common misconception. The data on your NAS (especially if being used as a file server) needs to be backed up also. This can be to another NAS unit, for instance, or to the Cloud using a service such as Amazon S3.