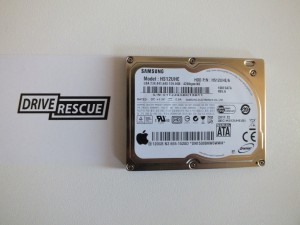 Last week, when he started up his Mac he got the dreaded question mark icon appear on his Macbook screen. His local Mac repair centre informed him that the drive had failed. They spent a couple of days attempting data recovery but this recovery proved to be beyond the scope of their expertise and they referred him to us.

Michael was devastated. He had three sets of trade conference photos and one set of food product photos for a new website that was launching soon. He had wiped his camera memory card and overwritten it several times over. He had not backed up because his external backup drive was full. He was kicking himself for his lack of backup. He was fretting over his reputation. It was a nightmare for him. We presented Michael with all his options and estimated price. We assured him that no stone would be left unturned getting all his photos recovered.

We took his 1.8” Samsung LIF drive into our cleanroom. Our diagnosis revealed that the drive had a stiction problem. (Stiction is where the drive heads stick to the drive platters). Using specialised Head Disk Assembly tools – the heads have to placed back to drive ramp with extreme care. But before this can even be contemplated, it must be ascertained if the drive heads are in anyway damaged before they are moved back. Otherwise, platter damage can easily incur.  This is where our rotatable electronic microscope came into play. We carefully examined the heads for damage. There appeared to be no evidence of any. Armed with this information, we now began the delicate process of lifting the heads back into position. Upon completion, we powered up the drive and it gently spun into life again. We then started the imaging process onto another drive as a precaution (a repaired hard drive can be an unpredictable and fragile beast).

The recovery proved to be successful. All his recovered data was extracted from the drive image to an external HFS+ formatted USB 3.0 drive. His photos (and reputation) saved.