Firmware is low-level software stored on the PCB and System Area of a hard disk drive.  It contains the most basic parameter information needed for the disk’s operations and provides the lowest level direct hardware control. One can think of the firmware equivalent to the disk’s operating system. It contains the manufacturer’s parameters needed to initialise the disk and contains the servo-adaptive information needed for the drive to operate smoothly. Usually, hard drive firmware contains low-level information, the servo-adaptive information, the disk’s model number, date of production, error logs, the P-List and the G-List (the defects tables). The firmware information can be typically found on the ROM chip of the PCB and on the System Area of the drive platters.

In early model hard drives, (such as those produced during the 1990’s) firmware was read-only. Nowadays, firmware is stored on EEPROM chips which means the firmware can be modified by data recovery professionals using specialist firmware emulator equipment with EEPROM read / write functionality.

The System Area (usually before LBA 0) also stores firmware information. Typically, it contains the P-List and the G-List. Every hard disk will contain a small number of sector errors before it even leaves the factory. This information is stored on the P-List. When the disk is put into everyday use, more errors will develop on it. These “growth errors” are stored on the G-List (growth defect list). For example, if the disk develops a bad sector, the firmware will add this to the G-List and subsequently the sector will be remapped to the reserved area.

Fig. 3 – G-List Remapping – Bad sectors are removed to the reserved area. This type of error correction  has been so successful for the storage industry, it is even emulated on the most sophisticated solid-state drives.

The system of bad-sector mapping and relocation is all very clever. But, sometimes due to physical damage of the EEPROM chip, the System Area or corruption of the firmware code, the partition table(s) will become invisible to the host system. A very common occurrence of this type of failure happened with Seagate’s 11th generation of Barracuda series of drives. However, it is not only Seagate where firmware failure can occur. Firmware failure is also commonly seen on the Western Digital D5000AAKS family drives.

Thankfully most disk firmware failures can be recovered from successfully. Experience, a sound knowledge of EEPROM firmware, specialised firmware repair equipment and a proper methodology often ends in fruitful results. Take for instance a case we were dealing with last week of a firmware failure of a 1TB Western Digital “Blue” drive. We received the drive from a Dublin architects office. One of the partners in the practice had all of his Archicad drawings from the last 4 months on his 4 month old laptop. These were projects he was currently working on.  He was incredulous when his I.T. support company told him that his hard drive in his relatively new laptop had failed. 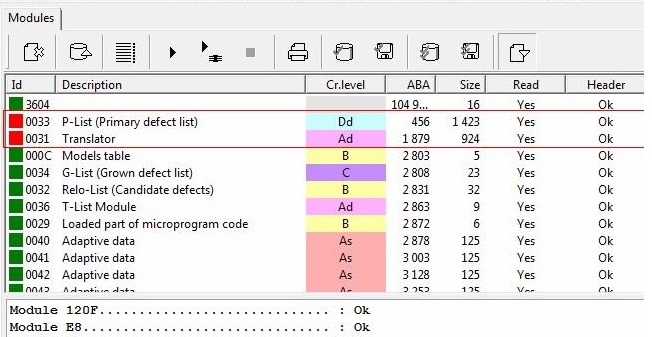 We performed diagnosis on his drive and it was immediately apparent that the firmware on the disk’s System Area had gone corrupt. Once diagnosis has been complete, we contacted the client for formal go-ahead to proceed with the recovery. Once formal approval had been received, we firstly backed-up the firmware modules on the EEPROM chip and the System Area to an external source.

Once a complete backup had been made, it was now safe to manipulate or edit the firmware. We used our specialised firmware recovery equipment to check the G-list and P-list. The P-List was corrupt. This was the root-cause of problem. After some careful editing of the faulty P-List and a regeneration of the translator, we were almost done. We switched the drives power supply off and on to make the drive initialize itself again with the new parameters. Success…the data was now accessible again. The recovered data was transferred onto a 1 terabyte external hard drive for delivery to the customer. All the files the client needed (Archicad, Word, Excel and .PDF files) were recovered successfully.