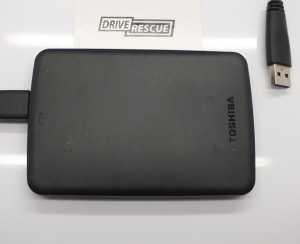 We recently performed data recovery for a customer whose 1TB Toshiba external hard disk (DTB310) stopped working due to an accidental fall. Our customer, a professional geologist, used their GoPro Hero4 which was mounted to a drone for collecting geological survey data. Rather than cluttering up their MacBook, they transferred footage and still photos onto their Toshiba disk and wiped the micro SD card ready for the next use.  Unfortunately, when reviewing footage, the user accidentally let the disk fall from a coffee table whilst it was still on. With much trepidation, he re-connected to his MacBook Air but he could hear it making the dreaded clicking noise. He badly needed almost nine months’ worth of data recovered.

On word-of-mouth recommendation, he delivered the disk to us. We removed the disk from its plastic shell. Inside the case, we found a Toshiba MQ02ABD100 S-ATA disk.  Our equipment revealed that head #1 had totally malfunctioned. We opened the disk up in our clean-room to investigate further.

Magnetic head #1 was damaged as was the slider. The only viable solution in this case would be to perform a head disk assembly replacement. We communicated to the customer the process and cost involved. After formal approval, we got down to work.

Using a Toshiba “head comb” (an instrument specifically designed for the removal of Toshiba head disk assemblies), we removed the damaged HDA from the customer’s drive. Then, using the same process with the donor disk, we extracted its head disk assembly. Using an anti-ESD, electronic tweezers we mounted the new heads into the patient disk. Once aligned correctly, we dismounted the head comb tool and carefully reassembled the disk.  Once reassembly had completed, the moment of truth had arrived. We connected power to the disk along with a S-ATA data cable. This disk spun into life with a smooth spinning noise – always very pleasing to hear. As a preliminary test and before we commenced to image the whole disk, we imaged sectors from LBA 0 to 100000. They all imaged fine. We then imaged the remainder of the disk which completed without incident.

To determine the quality of the recovered images (stills) we used Quik Desktop (available from the GoPro website). Video footage from the GoPro was recorded in .MP4 format (using the .H264 codec). This footage was viewable using the excellent VLC media player (free to download). All still images and video files opened without corruption.

A complete recovery of almost 780GB was collected by our customer saving him hours of laborious drone fieldwork!

Drive Rescue Data Recovery is based in Dublin, Ireland. If you need data recovered from your hard disk – we can help. We can recover from most Toshiba external hard models such as the DTB305, DTB310, DTB320, v63600 and v63700.  Previously we have also recovered data successfully from Toshiba models such as the MQ01abf050, MQ01acf075, MK5065gsxf, and MK5065gsx.