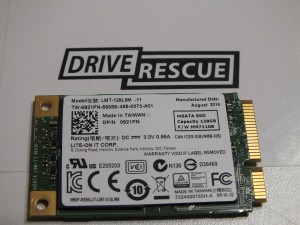 Drive Rescue is peforming data recovery from an increasingly large number of SSD drives. One driver for the popularity of SSD drives is the reducing cost of NAND memory. Another being the proliferation of light mobile devices – users now have an expectation that endpoint computing devices should be light and small. The success of NAND memory is self-evident. It has already killed off the floppy disk, 35mm photographic film and the one-inch hard drive. If you buy an ultra-portable laptop today, more likely than not it will have an SSD drive as its primary storage device. All MacBook Air laptops now have an SSD drive as standard.
SSD drives are not without their problems however. Take for example this Lite-On IT (pictured above) drive from a Dell laptop. The user of the said system discovered that it would no longer boot to the operating system. Using an mSATA adaptor, he tried reading the drive on another system but the drive was not showing up.
They delivered the drive to us – a Lite-On IT LMT-128L9M. The drive did register on our systems, but it’s ID appeared as scrambled hieroglyphics. Our diagnosis revealed that the drive had a corrupted microcode. So after some extensive searching we found an exact match microcode for this SSD which we then uploaded to our data recovery system. The drive now ID’ed but there was sill no data showing. Before we started any logical recovery, we imaged the drive to another one of the same capacity. Then using a hex editor we looked at every record in the file system for valid NTFS entries. We eventually found one promising looking NTFS partition which we rebuilt and then rebooted the drive . This time data appeared. We invited the client to login remotely to our secure systems to view his files. Word, Excel, Outook (.PST), Onenote (.ONE), .PDF and .RAF (Fuji Raw Image) were all successfully recovered for a very relieved and satisfied client.