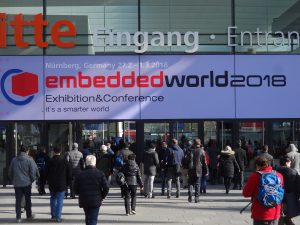 Last week Drive Rescue was in Nuremburg, Germany for Embedded World 2018. The Embedded World exhibition and conference covers a lot of areas including IoT, defence, aviation, automotive and industrial electronics. It is also one of the largest gatherings of global hard disk manufacturers in Europe, where they display their wares and discuss their future roadmaps. It was fascinating to see the latest in the world of storage devices and interesting to speak to the hard disk manufacturers’ first hand.

A number of themes emerged at this year’s exhibition and conference, including the focus which disk manufacturers are placing on data security (no doubt spurred by the impending GDPR legislation) and the emergence of SSD technology as de facto standard for many industrial and consumer-level devices. 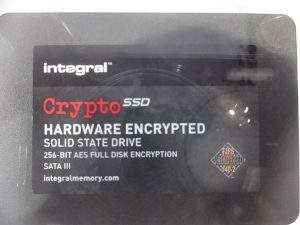 Disk manufacturers, especially European-based ones, seemed to have taken GDPR legislation to heart with companies such as Integral (UK) and SwissBit (Switzerland) now offering an extensive range of SSD disks and USB memory devices equipped with hardware-level AES encryption. For example, Swissbit have now introduced a USB memory stick (PU-50n DP) which uses native AES-256 encryption and which is also capable of storing an audit trail. It’s audit trail functionality is enabled by storing WORM (Write Once Read Multiple) data on a cleverly located hidden partition. To counter any brute-force hacking attempts, the PU-50n DP comes equipped with a hardware retry counter which limits the number of passwords which can be inputted within a set time frame.

Integral also displayed a range of AES-256 encrypted USB memory drives which are FIPS 140-2 approved and employ a dual-password system. So, if the user does forget their password, their IT administrator can regain access using a master password. But, pity the poor user who does decides to go it alone, because only after six failed access attempts the data and the encryption keys are all destroyed. Crikey, only step away from the device spontaneously combusting…

Integral were also displaying their range of AES-256 “Crypto” SSDs. Like their USB drives, they are FIPS 140-2 approved and if the number of password attempts is exceeded the encryption keys and data gets destroyed. A “high strength” 8-16 character alphanumeric password must be set which presumably precludes users inputting “PaSSwoRd” or “fluffy123” as their password. According to the Integral marketing bumf, their encryption is compatible with most endpoint security applications as it uses a configurable “hardware ID” for compatibility. In the next couple of months, it will be interesting to see if hardware SSD encryption schemes such as this pose a challenge to the hegemony of McAfee, Symantec, Sophos et al in the full disk encryption arena.

And speaking of McAfee, Hagiwara Solutions (Japan) have brought out this AES-256 encrypted USB stick which also contains anti-virus detection powered by McAfee software. Virus propagation prevention and encryption all in the same package! 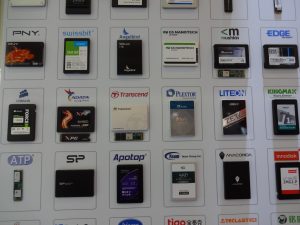 The Last Hurrah of S-ATA

The venerable S-ATA bus interface has served the IT world exceedingly well over the last fifteen years. It liberated many an IT administrator from the tyranny of jumper settings and compared to its P-ATA predecessor, introduced a seismic leap in faster I/O disk operations. But even though S-ATA has progressed to its third iteration (SATA 3.0), for most solid-state disks, this bus standard and its command protocol AHCI has now become a data bottleneck. For example, most NVMe solid-state disks can handle 65536 parallel I/O requests compared with only 32 I/O requests processible by S-ATA 3.0.

And while S-ATA III and AHCI will probably be around for legacy applications for quite some time yet, its days of being the primary interface for internal storage devices are probably numbered. So, if S-ATA is on the way out, what is going to replace it? Enter PCIe and NVMe.

All aboard the NVMe bus

NVMe (Non-Volatile Memory) is a protocol designed by a consortium of hard disk and NAND manufacturers including Western Digital, Samsung, Toshiba, Intel and Micron to standardise the interface and interoperability of PCIe. In essence, the NVMe standard allows disk manufacturers fully exploit the parallelism afforded by PCIe when interfacing with host systems. Operating systems need only one driver for NVMe compatibility. This driver has been included in Windows OS, from version 8.1 upwards and in Apple’s OSX from version 10.10.3 (Yosemite).

The rise of the M.2 Form Factor

There were plenty of SSD disks at Embedded World 2018 still using variants of the S-ATA connector such as mSATA (52pins split into 16 pin and 36 pin sections) and Slim SATA (22 pins standard S-ATA connector). However, the M.2 form factor (pronounced m dot two) was by far the most common on display. The first generation of this form factor came in the guise of NGFF (Next Generation Form Factor) which is rarely seen these days. The present-day M.2 form factor uses three socket types including; “B key” edge connector, “M key” edge connector and “B and M” key connector. A “B key” uses up to two PCIe lanes whereas an “M key” can use up to four. A substantial number of SSDs use the “B and M” key connector so they can connect to any socket. Each connector pin is rated for 50V and 0.5A. Using PCIe x4 the M.2 standard allows for blisteringly fast data throughput speeds of up to 31.5Gb/s compared to 4.8Gb/s offered by SATA 3.0.

It might be easy to dismiss the NVMe standard as just a marketing gimmick. After all, it is designed using PCIe architecture. But, the designers of this protocol appeared to have gone to great lengths to eke out every ounce of SSD I/O speed when interfacing with its host. The real-world throughput difference between an M.2 disk using PCIe x4 and MLC NAND using NVMe versus an M.2 disk of similar specification not using NVMe can be vast.

Pure SLC NAND was harder to find than hens teeth at Embedded World 2018. This is because it’s ten times more expensive to manufacture than MLC and many producers are unwilling to tie up their expensive fab (semiconductor fabrication) facilities for this niche product. So even industrial-class SSD manufacturers like Innodisk are now using pSLC (pseudo-SLC) as a happy medium between the reliability of SLC and the production costs of MLC. Pseudo-SLC (otherwise known as MLC+) uses MLC NAND but the memory cells are used in single-bit mode. Moreover, the voltage threshold is shifted for increased endurance, reduced error rates and better SSD longevity.

Up until now, most SSD manufacturers have been using planar NAND. Typically, MLC (Multiple Level Cell) stores two bits-per-cell while TLC (Triple Level Cell) stores three bits-per cell.  But the quantum physics envelope can only be pushed so far. As die lithographies reduce in size to 19nm,15nm and 14nm issues like cell-to-cell interference and disturbance effects start to kick in. This results in un-correctable bit errors which even sophisticated ECC algorithms such as BCH or LDPC cannot fix. This results in lost or corrupted data. So NAND developers have responded by stacking their cells on top of each other instead of laying them out vertically. This is analogous to building a skyscraper instead of a building which extends over a wide surface area. Samsung were one of the first manufacturers to commercialise this type of NAND and named it “3D NAND”. Other manufacturers like SanDisk/WD, Crucial, Intel and Adata have followed suit. Today the widespread adoption of 3D NAND has been aided by controller designers like Phison and Silicon Motion. The latter having recently released their SM2262 PCIe 3.1 NVMe 1.3 compatible controller designed to work optimally with 64-layer 3D NAND. And Phison have recently released their PS5007-E7 controller optimised for 3D NAND and NVMe.

Of course, Intel have got some critics in their choice of technology, namely – why are they deploying 1970’s technology for their 3D NAND solid state disks when an apparently “better” transistor design exists? Well, Intel say they are using “discretised floating gates” which they claim are more compartmentalised and better suited to preventing electron leakage. They also claim that floating gate transistors are a “tried and tested” technology, whereas charge trap flash transistors are not. It will be interesting to see the trajectory of 3D NAND over the coming months.