Drive Rescue recently attended the IP Expo Europe event in London checking out some of the latest storage devices. The data storage world continues to move at a blisteringly fast pace and there were lots of interesting new technologies on show. 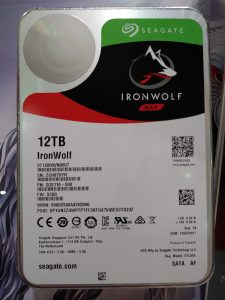 Just arrived (1 hour before above photo was taken) from Seagate’s European hub in Schipol was this 12TB Iron Wolf disk. With a speed of 7200rpm and a transfer rate of 250 MB/s, this range of disks also comes with “Rotational Vibration Sensors” to minimise vibration. Its disk heads use PMR (perpendicular magnetic recording) technology and not SMR (shingled magnetic recording) which one might expect on a disk this size. This is thanks to helium gas used in the disk’s main chamber which reduces platter turbulence and enables increased areal density. After all, 12TB is a lot of bytes for just 7 thin platters. Of course, many years ago Seagate toyed with the idea of injecting helium into the main chamber of their high-capacity disks but abandoned the idea as no economically viable production technique could be found. Then Western Digital came along where Seagate left off. Their production engineers made a breakthrough, developing a helium-injection process suited for mass-scale production. So Seagate have now come full circle and have realised their helium dreams. But “what about reliability?” I hear you ask. Well, Seagate are claiming the MTBF (mean time before failure) for this disk (model pictured) is 1.2 million hours…(stop sniggering). And not so long ago, Seagate said they would relinquish using the MTBF metric and promised they would use AFR (Annualised Failure Rate) instead to quantify disk dive failure rates. I’m guessing they reinstated this awful but more standardised metric not to be disadvantaged when procurement teams  devise HDD comparison matrices. Failure specifications aside, Seagate (with a little prodding from Synology) have developed their own disk health monitoring software for this disk family. This diagnostic and monitoring software awkwardly named “Iron Wolf Health Management” (yes, I know it sounds like a dodgy healthcare insurance company from Ohio) is badly needed as SMART has become well past its sell-by date. According to Seagate’s marketing bumf, it monitors 200 disk parameters which influence disk health as opposed to the 20 paltry parameters used by SMART. The software also promises “intervention action” notifications in instances of imminent disk failure. Moreover, it offers a probability rating of catastrophic failure and gives a longitudinal view of disk health by showing trend analysis rather than the one-snapshot-in-time view offered by so many other HDD monitoring apps. Already, Synology the NAS manufacturer, has integrated the IWHM software into their DSM operating system. 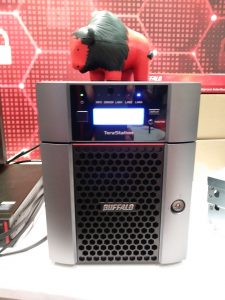 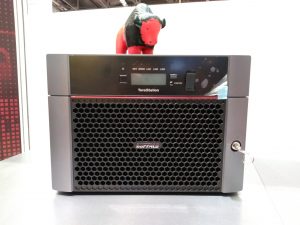 And talking of NAS devices, Buffalo, the Japanese NAS manufacturer were also showcasing their wares. Their flagship Terastation NAS line-up has been re-designed with security at the forefront. Their NAS devices now employ a secure file-access architecture where not even the administrator has root-rights. In terms of encryption, AES-256 hardware encryption is now standard on all the Terastation range. This is a useful feature if the NAS is accessed remotely or in the event of your NAS device being stolen. (And on that note, all Terastations also come equipped with a Kensington lock). There is also the option of enabling pre-boot authentication using a VPN, Windows Server or PC. Buffalo has also introduced its “Drive Recognition Technology” whereby the volume’s disks are digitally “tied” to the hardware. Just in case, all these security features go haywire due to corrupt or bricked firmware, Buffalo have added a feature known as “duplex firmware”. This stores a secondary firmware module to fall back on should the original module go askew. Nice! A Terastation NAS would make an ideal Christmas present for any data protection officer…

QNAP – NAS with ThunderBolt 3, SSD caching and advanced virtualisation (for a NAS…) 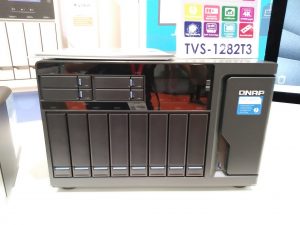 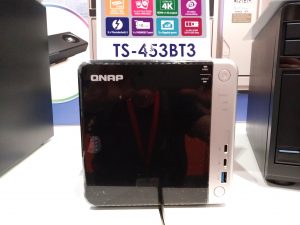 QNAP also presented an innovative line-up. Their TS-456BT3 model comes with two ThunderBolt 3 ports (also compatible with second generation USB 3.1) which is sure to please both Mac and Windows users collaborating in OS agnostic environments. This model also has a dual M.2 SATA interface for disk caching – (SLC or MLC SSD recommended) for faster transfer speeds. QNAP were also displaying their performance powerhouse NAS – the TVS-1282T3. This 8-bay (for 2.5 or 3.5) and 4-bay (2.5” SSD) device is powered using an Intel i3 or i5 processor and can hold up to 64GB of DDR4 RAM. This model also offers link aggregation in the form of four 10GbE ports. Used in conjunction with Thunderbolt 3 this can offer blistering fast data transfer speeds of up to 40Gb/s. 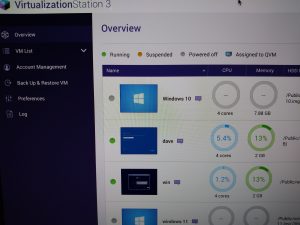 In terms of data backup, QNAP offers their Real-Time Remote Replication (RTRR) feature which can backup files to another NAS immediately or to a remote FTP server. Their QTS operating system (version 4.2 or higher) also allows for volume snapshots using their Snapshot Manager utility. Another innovative feature of this model is that it supports VJBOD whereby unused QNAP devices (selected models only) can be connected to it to create virtual storage pools. These can be managed using QNAP’s Virtualization Station 3 software. So, if you ever wanted to have your own mini data centre – now is your chance. 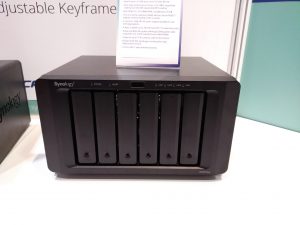 Synology and their transition to BTRFS

While QNAP might be innovating with NAS interconnectivity and virtual storage pools, Synology are also innovating albeit at a more fundamental level. The BTRFS (developed by Oracle) file system has now become default on most of their mid-to-high range NAS devices. Previously, Synology’s used EXT3 or EXT4. But in 2009 and again in 2015, EXT4 developed bugs which meant several thousand EXT4 based servers and other storage devices got hosed. This might have spurred a decision at Synology Towers to change the file system of their devices altogether. In terms of file systems, BTRFS is still only a baby. Introduced in 2009, it’s still only on version 4 but it does offer some compelling data protection features. For example, it stores two copies of metadata per volume. This could become extremely useful when performing data recovery from a disk with bad sectors or from a damaged disk. Moreover, BTRFS includes native check-summing for data and metadata, making sure data integrity is maintained. So even if bit-rot has set in, file corruption will be detected and automatic recovery using mirrored metadata will initiate (theoretically, at least). And if that’s not good enough, BTRFS offers much better snapshotting capability whilst incurring very little overhead in terms of disk space or performance. Certainly, in this era of crypto-ransomware, snapshotting has become more important than ever. So, maybe Synology’s decision to jump from the EXT ship was probably not such a bad idea.