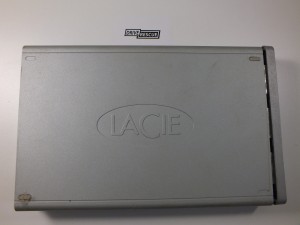 We recently helped a management consultant from Co. Cork recover data from his failed Lacie Big Disk configured in RAID 0. He bought the drive 4 years ago for personal and business use, and it worked great for him. However, last week when he went to turn it on, it was not recognised by his iMac or MacBook Pro computer. He look it to his local computer repair shop. They removed the disks from their enclosure, and they discovered that Drive “0” was not operational. They referred him to Drive Rescue data recovery 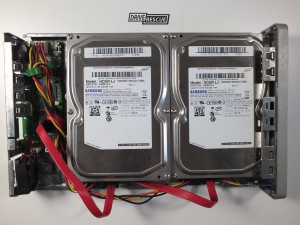 We opened the case and found 2 x Samsung HD501LJ 500GB disks inside. Disk 0 was clicking when initialised whilst Disk 1 seemed to be healthy. The problem with a RAID 0 configuration is that the data is spread across two disks. Thus, having one disk operational does not mean that you still have half your data because it is spread across the two disks evenly. For example, if you have a .JPEG file, 50 percent of its constituent bits will be stored on Disk 0 and the other half on Disk 1. We examined Disk 0 further. Heads “2” and “3” had failed. This would require a head-disk assembly swap. Because Disk 1 was identical, it means we could transplant the HDA from Disk 1 to Disk 0. But first, we would have to image Disk 1.

Once the imaging for Disk 1 completed and we had verified it’s integrity, we brought the two disks into our cleanroom from their “operation”. Firstly, this involved removing the “good” HDA from Disk 1. This is an intricate procedure which requires skill, experience and a steady hand. Once this HDA was removed from Disk 1, it was now time to remove the defective HDA from Disk 0. Now both HDA’s had been successfully removed.

Now it was time to start the “transplant”. There are a number of criteria here which must be met for a successful head disk assembly swap. The transplanted HDA must be aligned perfectly with the disk platters. If wrongly aligned the “flying height” of the heads will be too low or too high. In both cases, this can result in the non-reading of some or all of the disk tracks. Another important factor to mention is to torque the restraining screws correctly. If there is not enough pressure, the platters can warp. Too little pressure and the syncing between heads and platters will be off-kilter.
With the replacement HDA from Drive 1 now successfully transplanted to Drive 0, it was not time to image it. This took approximately 3.5 hours.

The second stage of this data recovery would involve rebuilding the RAID array of the two disks so that original volume could be recreated. This involved finding the block size, the RAID offset and the block order. These parameters were found using a hex editor.

After some hours of calculations the RAID parameters were found and the original volume name now reappeared. Word, Excel, PDFs, .JPEGs, and Sage Accounts files were all extracted onto a USB external drive and dispatched to our more-than-happy client in Co. Cork.