Some of the Drive Rescue team were at IP Expo in London earlier in the month investigating some of the newer drive technologies. (Drives which we might be recovering from in a couple of months time…) Below are some snippets from the exhibition. 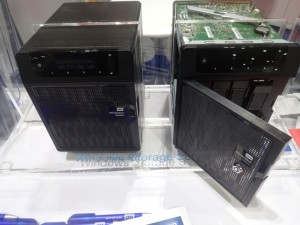 Western Digital Sentinel DX4200 4-bay NAS device which runs Windows Storage Server 2012 R2 Workgroup OS. Powered by an Intel Atom dual core processor. 4 X 3.5 storage bays and 1 x 2.5 bay for a boot drive. It uses the relatively new Windows Storage Spaces (software RAID) to create a storage pool and uses 4GB ECC memory which is upgradeable to 16GB. WD’s proprietary StorCentral dashboard is used which looks very slick. The layout of the GUI is extremely well executed, making most important functions intuitive to use. WD claims their Smartware Pro is “a single solution for backup and storage”. Their generous supply 4 x USB 3.0 ports adds a lot of credence to this claim. The only bugbear I have about this device is that the RAID “Software Spaces” is still in its infancy as a RAID software. Some users might be a bit apprehensive of using such a new RAID application to manage their important data. 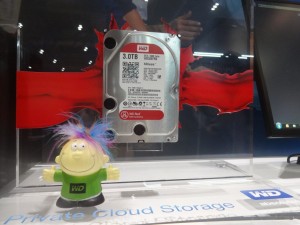 A 3 TB NASware drive from Western Digital. Commonly known as WD Red drives, they are proving very popular for their good compatibility with NAS devices and good reliability. (WD smiley mascot not included…) 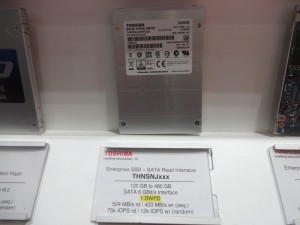 A Toshiba 240GB enterprise-class SSD. When idle, it has a meagre power consumption of 1 Watt. If this was mechanical HDD of the same capacity it would probably consume around 5-6 Watts when idle. It is little wonder SSD’s are proving so popular in data centres where operational cost is a key determinant of hard drive choice. 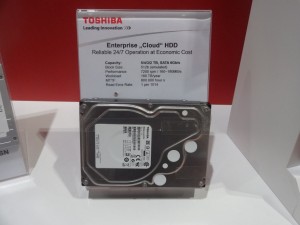 Many users wonder where and how their data is actually stored when they put it in the “Cloud”. Here is a 2TB S-ATA drive which Toshiba market as an Enterprise “Cloud” HDD. You will see the spec sheet that it claims to be able to handle 180TB a year with a Read Error Rate of only 1 per 1014. So if you ever wanted to know what kind of hard drive is used to store your data “in the Cloud” look no further… 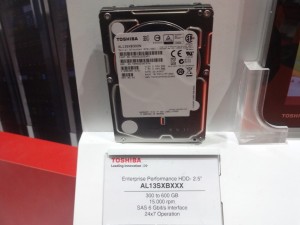 A 2.5” enterprise-class 15000rpm SAS drive. The 2.5” form factor is now becoming the de facto standard for enterprise-class drives. A key driver of this trend is their lower power consumption compared to their 3.5” brethern. 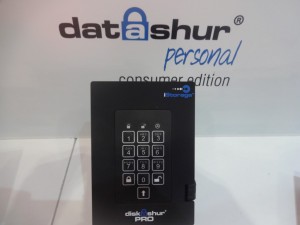 While this device might look like a new type of door entry system – it is actually a portable encrypted hard drive from iStorage. It uses military grade XTS-AES 256 hardware encryption. No drivers required. It is the armored Humvee of the hard drive world. It even has a brute force “hack defense mechanism” and a “self destruct” feature. Available in capacities of between 250 GB and 2 TB. As all of the encryption is on-board the device – it might prove a very useful conduit for super-confidential information without hassle of setting up encryption software on different systems. 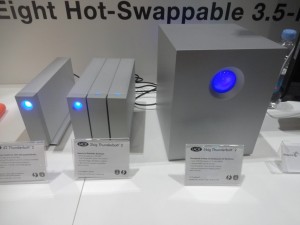 LaCie has now been taken over by Seagate. However, the LaCie brand will be retained and Seagate intends to push their LaCie Thunderbolt range of drives for Mac users and the creative professional market. This new range of drives come with Thunderbolt 2 ports as standard. While Thunderbolt 1 had bi-directional transfer speeds of 10 Gbps, Thunderbolt 2 has a whopping speed of 20 Gbps. (This is four times faster than USB 3.0). These mammoth throughput speeds might seem a bit superfluous for the average user, but are really in demand by those working with large file formats such as the ultra high-definition 4K video format. 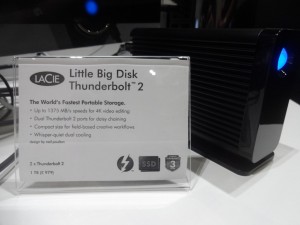 This is the baby of the LaCie Thunderbolt 2 family affectionately named “Little Big Disk”. A data transfer rate of 1375 MB/s and daisy-chaining capability. But, perhaps the biggest surprise about this little storage device is that inside its sleek black casing, it uses a PCIe SSD. Combined with a Thunderbolt port, this type of drive is perhaps the future of portable storage devices. The best things in life really do come in small packages.